For youngsters in school, nutritional meals really do lead the higher grades and better performance across the board. Today we’ll explore a policy called the Community Eligibility Provision or CEP that allows schools in low-income areas to offer free meals to all students. We have two guests today. Marianne Hedrick Weant, Programs Manager at the North Carolina Alliance for Health and Dr. Sarah Crittenden Fuller, Research Associate Professor at The University of North Carolina and a proud Duke alum from our own program. She’s also the coauthor of a new policy brief on this topic, entitled Meals Matter, The Community Eligibility Provision and Students’ Success in North Carolina.

END_OF_DOCUMENT_TOKEN_TO_BE_REPLACED 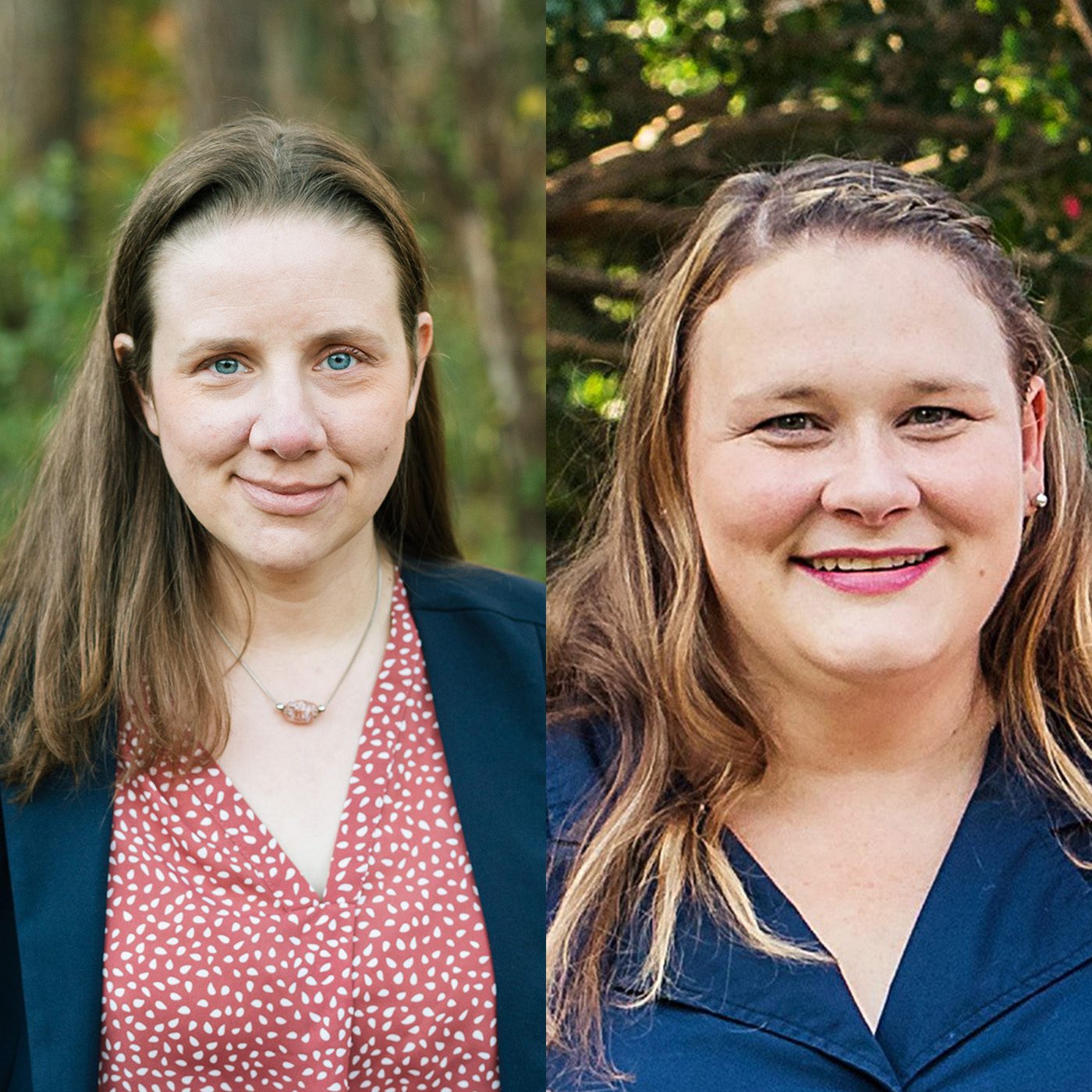 Sarah Crittenden Fuller holds a Ph.D. in public policy from the Sanford School of Public Policy at Duke University. She currently serves as Principal Investigator for the multi-year evaluation of the Gaining Early Awareness and Readiness for Undergraduate Programs (GEAR UP) North Carolina intervention. Fuller is also leading projects examining the impacts of natural disasters on educational outcomes nationwide and the impacts of remote learning due to COVID-19 on schools in North Carolina. Other areas of ongoing research include high school reform models, the impacts of school nutrition on academic outcomes, and the influence of hurricanes in North Carolina on childhood outcomes. Fuller’s work leverages large administrative datasets and quasi-experimental designs to estimate the causal effects of particular policies or events on student outcomes. She uses primarily quantitative methods to address research questions surrounding schools and students focusing on questions that have the potential to inform policy decisions. Fuller has received grant funding from the Spencer Foundation, the National Science Foundation, the Robert Wood Johnson Foundation, the Russell Sage Foundation, and the W.T. Grant Foundation. She has recent publications in Economics of Education Review, AASA Journal of Scholarship and Practice, AERA Open, and Urban Education.

Can you help our listeners understand why school meals are so important to students and how universal free meals are so different than the traditional way these programs are structured?

Sarah: There’s a large body of research that shows how important proper nutrition is for children’s cognitive development, as well as their health and development. Kids who aren’t getting proper nutrition. They aren’t able to concentrate in school and to perform the way that they would if they were receiving proper nutrition. School meals have historically provided nutrition and increased food security for low income students. As adults sometimes we tend to have the perception that school meals are low in nutritional quality, but that’s not really true. Recent research suggests that school meals provide better nutrition for students than the alternatives that they might be bringing from home or eating otherwise.

The traditional structure of the National School Lunch Program and the School Breakfast Program requires many eligible families to apply to receive these free meals, even if they are eligible based on their income. And so that can create a barrier to participation either because families simply don’t know that they need to apply, don’t know how to do so or have some concerns about signing up for this benefit. In addition, because receiving free meals is tied to income, it can be stigmatizing for students. Kids can be pretty savvy, especially when you think about the middle and high school level. And they can recognize that receiving a free meal is a marker of family income, and that can result in students not really wanting to walk up there and get those meals.

So the Community Eligibility Provision allows high poverty schools to opt in to providing universal free meals for all students within their school, rather than collecting this individual eligibility. Instead school meals just become available for everybody, which is great in several ways. It reduces the administrative burden from schools who are having to still collect these applications, have a cash register in the cafeteria where they check off students and make sure that they’re eligible for free meals or collect money if aren’t eligible. In addition to removing that administrative burden, this has the potential to change the culture around school meals.

Thanks and Marianne I’d appreciate your thoughts.

Marianne: School meals ended up being such a weird part of the day as they are right now. And that’s because there’s really no other part of the school day where you expect some kids to not pay anything at all and you expect other kids to pay a certain amount. And then a third group of kids to pay a different amount. It’s a really really strange point in the school day that can cause cultural issues at a school and create groups of kids that have and groups of kids that have not. But it doesn’t have to be that way. And CEP is a real opportunity for a lot of schools to change that.

So what are the effects of universal free meals for students?

Sarah: First off, one of the questions I think a lot of people have as well, do more students actually eat meals when there are universal free meals? Because in theory, the students who would benefit most, the low-income students already had access to free meals. But what we do see is that when schools switched to universal free meals through the Community Eligibility Provision, there is a big increase in the number of meals served. In North Carolina in that first year that school started implementing the Community Eligibility Provision, the increase was equivalent to every student within the school eating 20 additional breakfast and 20 additional lunches, which is a pretty big impact. And now of course we know it’s not evenly distributed across the school, but this means many students are either eating meals more days or students who weren’t eating school meals at all are now eating school meals. And so that’s a pretty notable change.

Research also shows that providing universal free meals through CEP can have impacts on educational outcomes. So some studies show improved attendance for students and schools that are offering free meals. This makes some sense if you think about the incentive students have to come to school so that they can pick up that free breakfast. In many studies and including some work I’ve done myself increases in academic performance on test scores related to school meals and reductions in suspensions, particularly among older students, a brand new study even shows that students at schools with Community Eligibility Provision report improves school culture, they report feeling safer at school and particularly feeling safer within the cafeteria.

So all of these things are really big benefits that extend beyond just making sure students have food security that also impacts everything about their school day. In the state of North Carolina, you see that the schools that are participating in the Community Eligibility Provision compared to schools with similar rates of low-income students have a higher report card grades. Broadly we’re seeing, it looks like these schools are performing better academically and that’s really great news.

I remember in the early days when people were considering universal free meals, there was a special concern around breakfast that some kids may be eating at home and then coming in and having another breakfast meal and that it might be contributing to the childhood obesity problem.

Sarah: So the evidence I’ve seen looking at obesity and the Community Eligibility Provision suggests that that’s not what’s happening. When you think about kids, particularly young kids, eating a second breakfast may be fairly normal for that age range. I think the assumption that if students are eating twice, that that is leading to obesity, isn’t always a great assumption.

You’ve raised good points that it’s overall nutrition that counts, not necessarily the number of meals. So I’d like to get both of you to weigh in. What do you think the future will look like for universal school meals?

Sarah: So the pandemic has created a big change here where nationwide schools have been able to offer universal free meals, whether they were in school or out of school for at least some portion of the time they’ve been providing school meals to students who aren’t actually physically in the school building. For the moment, the US Department of Agriculture has extended some of those waivers to allow schools to continue offering universal free meals through the 2021-22 school year. So that’s going to last this second pandemic school year, we’re approaching here. After that, the future’s uncertain. That’s an important problem that we have now, a year to think about it is well what does the future look like?

The data that I’m talking about with regard to the Community Eligibility Provision is really only for those first three, four years of implementation. It’s great that we’re seeing positive results already, but we really don’t know what it looks like once this has been in place for long enough to really create that culture shift that you would hope to see, particularly at the high school level. Even if you remove the cash register and you change the mechanisms for receiving school meals, particularly at the high school level, it’s going to be a lag while students are still thinking about these meals in the same way. And so some of those reductions in stigma and increase in uptake of school meals may take a while. And so we don’t really know yet the full potential of universal school meals. Hopefully, as we’re moving forward here and coming out of this pandemic and thinking about, well, are we going back to a system that requires some students to pay for meals and others to not, this is something that states and the nation need to be thinking about.

And Marianne what are your thoughts on the future?

Marianne: I think it’s interesting because we’re in kind of a really critical moment for school meals, where we have another year of universal meals for our pandemic school year, but we’re also right up on child nutrition reauthorization at the federal level. And so it’s an opportunity to eliminate this weird point in the day and make universal meals available to all schools and all school systems this year. Will they do it? I don’t know. I feel like we’re seeing more energy around this than we have in the past. And I think it’s hard to imagine going back to it and telling kids in a year, that they’ll be paying for school meals when they didn’t this past year. And if it’s not that at the federal level, there’s of course an opportunity for it to be done at the state level. We just saw California pass universal meals there, and then it always can be done just by making sure that every school system and every school that’s eligible for CEP participate. 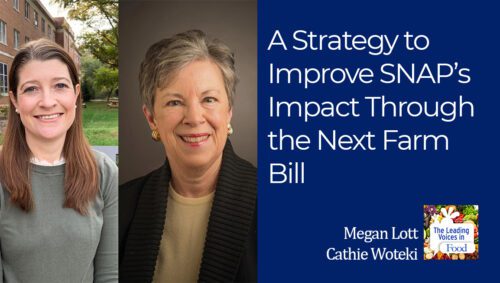 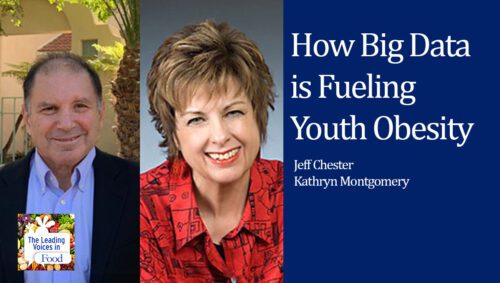 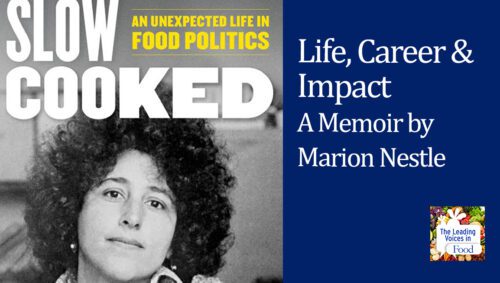 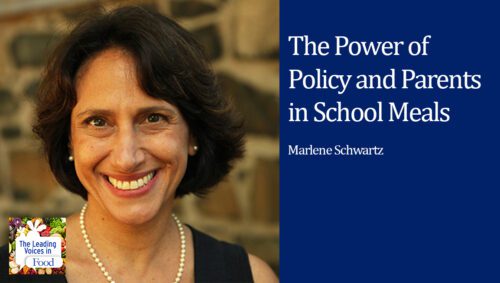 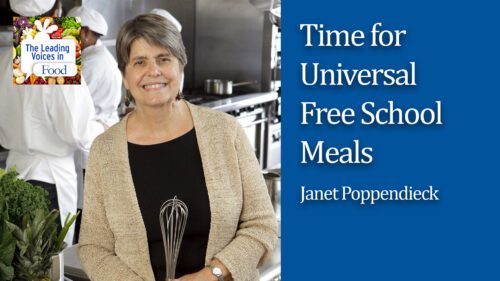 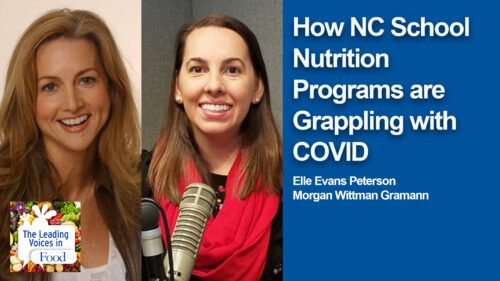 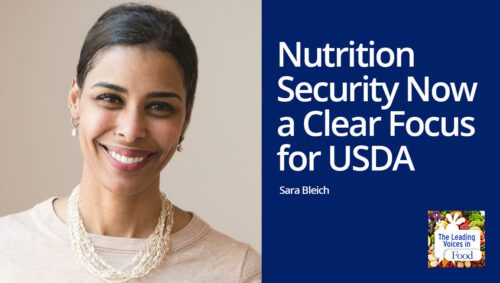 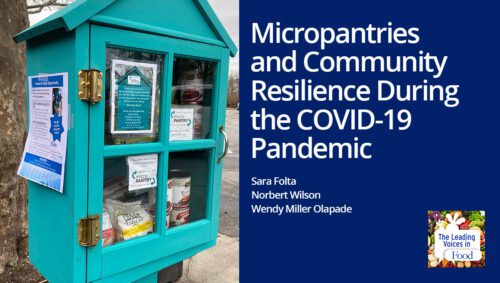