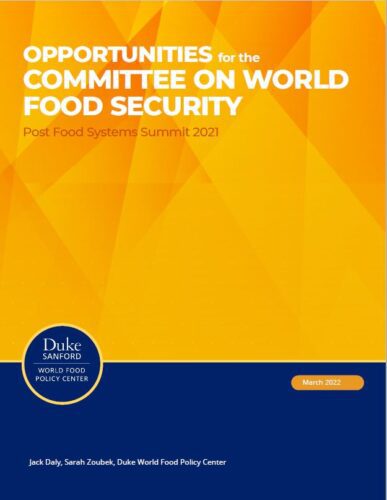 This paper is a think-piece on the role of the Committee on World Food Security (CFS) in supporting outcomes associated with the Food Systems Summit (FSS). It explores key questions the CFS and its advocates are likely to grapple with moving forward. The goal of the analysis is to identify potential pathways for the CFS within the global governance environment, as policymakers attempt to spur action toward the Sustainable Development Goals (SDGs).

The CFS is a multi-stakeholder, intergovernmental forum in the United Nations (UN) system that develops and endorses global policy recommendations related to food security and nutrition. It does this by supporting and advising member states, promoting accountability, sharing best practices, and developing global strategic frameworks. It holds an annual plenary session that serves as the central mechanism for creating global consensus on voluntary policy recommendations.

Its most prominent strengths include an inclusive structure that provides formal mechanisms for both civil society (the CSM: Civil Society Mechanism) and the private sector (the PSM: Private Sector Mechanism) to participate in discussions with member states and diverse stakeholders (academia, UN agencies, others). The CFS’ science-policy interface―the High-Level Panel of Experts (HLPE)―provides knowledge-based guidance to guide policymaking.

In 2021, UN Secretary-General António Guterres convened the FSS as part of the Decade of Action to achieve the SDGs by 2030. The FSS was intended to catalyze action on all 17 SDGs, each of which connects in some way to food systems. This is a broader set of goals than the CFS, which focuses primarily on food security and SDG2 (“end hunger, achieve food security and improved nutrition and promote sustainable agriculture”).

This project was an outgrowth of conversations in 2021 between the World Food Policy Center at Duke University and other stakeholders with interests in the global food governance architecture. Animating questions for the report include the following:

The analysis in this report draws from: 1) a literature review; 2) semi-structured interviews with key officials and academics familiar with the CFS, FSS, and the global food governance landscape; 3) an expert roundtable; and 4) an advisory group of faculty with expertise in global health, defense, international development, and international organizational design.

The CFS can have only limited engagement with the outcomes of the FSS without more capacity support.

Interviews with this study’s sample of officials, academics, the roundtable, and the advisory group revealed a nuanced assessment of the FSS. Some were encouraged by discussions on sustainable food systems or specific Coalitions of Action. Others thought the Scientific Group’s work might lead to lasting changes on issues such as data collection frameworks or science-policy frameworks. However, many sounded a note of caution and were skeptical the FSS would have significant value.

Stakeholders have taken steps to ensure inertia is not the FSS’s legacy. The UN Secretary-General called for a Coordination Hub led by the Food and Agriculture Organization (FAO) to ensure collaboration across the UN system in response to the FSS. The Coordination Hub has, in turn, incorporated elements of the CFS into its structure in two places:

The CFS met in October 2021 to wrestle with the implications of the FSS. There were three schools of thought among members and participants on how the CFS could engage with the FSS (Figure 1. Three options for CFS action; Table 1 provides a deeper summary): 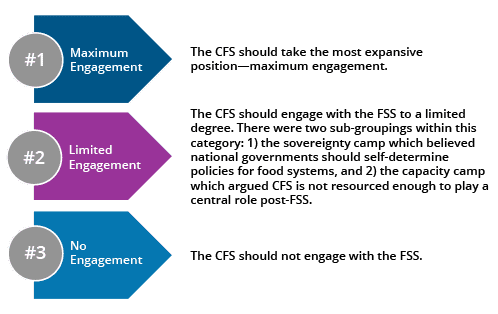 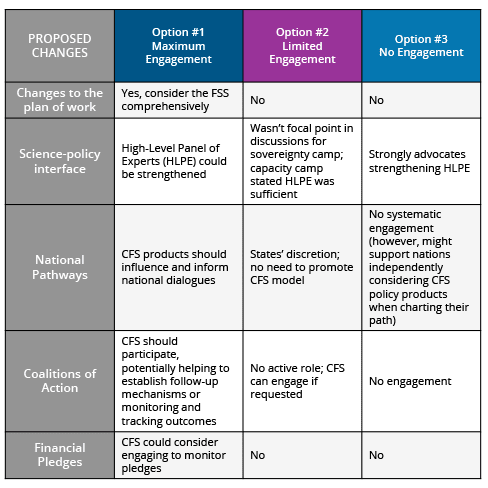 As a political body, the CFS’ response to the FSS will be driven by political considerations. Based on our survey of the landscape, Option #2 (limited engagement) appears to be the most likely scenario. There are multiple reasons for this conclusion:

The CFS is positioned to be an intermediary for the Coordination Hub, providing ideational support, convening and coordination.

The report utilizes the orchestration framework to examine the CFS’ method of governance. Orchestration literature provides insight into how organizations with limited resources and authority can meet broad mandates and ambitious governance goals. An “orchestrator” is a lead actor that possesses certain features―legitimacy, focality (a central place in the issue area), financial resources, and a collaborative culture―and works through “intermediaries” to influence the behavior of targeted actors (Abbott & Bernstein, 2015; Abbott & Hale, 2014).

The CFS is primed to be an intermediary and not an orchestrator in the post-FSS environment. However, that does not lessen the CFS’ importance. Successful orchestration involves intermediaries that possess certain tools of orchestration that can be used to influence networks (Abbott & Bernstein, 2015).1 Specifically, the CFS possesses at least two tools that can be leveraged by the Coordination Hub: ideational support and convening & coordinating.

Other tools of orchestration―material support and review mechanisms―are less promising. Insufficient funding has been a constraint for the CFS for much of its lifecycle since its 2009 reboot,so further roles for the CFS must come with increased material support or capacity. Thus, the CFS’ ability to provide funds or serve as a review mechanism is extremely limited. The CFS’ lack of independence also hamstrings its ability to fulfill an accountability role.

The post-FSS environment could enable the CFS to increase its ability to set global agendas and utilize its endorsement tool, if it can make improvements to its internal processes (topic selection and an overloaded agenda).

Two other tools of orchestration—agenda setting and endorsement—require expanded discussion. While the CFS possesses features that suggest it could deploy either tool in support of the FSS, the historical record suggests it will be difficult—the CFS has not demonstrated enduring capacity for either. We see both as key areas where the CFS should ask itself how it can be more effective.

A place to start might be to assess topic selection—those involved in the process question whether the CFS bureau manages the process well. Another focus area could be the CFS’ overloaded agenda and ensuring new interests do not crowd out the topics that have already been selected for the current program of work.

If internal improvements can be made, examples from our discussions where the CFS might help set external agendas included: 1) climate change and food systems; 2) SDG stock-taking in 2025 or the post-2030 agenda; and 3) SDG17.

Considerations of consensus, support for the HLPE (with a narrow focus on food security), and focality may increase performance.

Any potential for the CFS in the post-FSS environment rests on it maximizing the tools it possesses. We believe focusing on the following questions could help it be most effective.