Power & Benefit on the Plate – The History of Food in Durham, North Carolina

Power & Benefit on the Plate – The History of Food in Durham, North Carolina 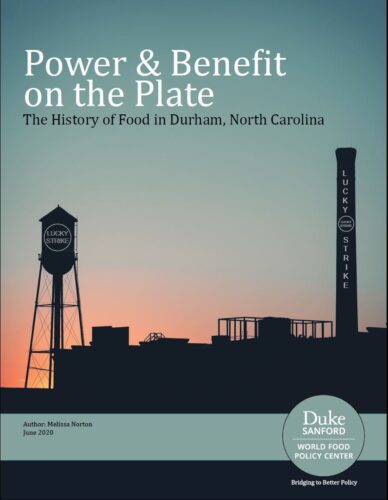 This report is an exploration of the history of Durham, North Carolina through the lens of food, agriculture and land. The goal of this research was to understand the inequities in Durham’s food landscape today through analysis of the impact of social policies on Durham’s various communities over time. This research identified compelling evidence of systemic inequity in policy and policy implementation that helps to explain the lived realities of Durham’s communities today.

The story of food in Durham is fundamentally a story of power. This report explores the historical regulation of food and agricultural resources, as well as social policy and practice as mechanisms of benefit, control, and exclusion. For example, in the 1500-1600s, Europeans imposed private land ownership on this continent through colonization. Private land ownership had not previously existed in what is now the Americas and became a driver of generational wealth, privilege, and power. People from agrarian societies in West Africa were brought by force to North America to support large-scale agriculture as enslaved labor. This stolen labor helped to create wealth and the economy for white people in the United States. Although slavery was abolished after the Civil War, Black people could not vote or acquire land until 1866. State and local governments also legalized racial segregation through Jim Crow laws that prevailed from 1892-1964. Social policies, procedures, and legal processes have and continue to serve those in power and fail to provide equity and protection to BIPOC (Black, Indigenous, and People of Color) communities.

The struggle to buy and retain land both within families and across generations is a persistent theme in Durham’s history. For example, in the aftermath of the Civil War, many states passed restrictive ‘Black Codes’ laws designed to keep Black people as cheap labor source to work the land. One of the labor control mechanisms affecting both Black people and poor white people was a practice called sharecropping. By 1920, Black farmers owned 26% of farmland in Durham—a peak in ownership that has never been regained. However, multiple private property law mechanisms made it possible to force Black families off the land. In 1935, the Federal Housing Authority established a redlining practice that targeted BIPOC communities as too risky for mortgage support. Redlining prevented BIPOC people from purchasing homes at the same pace and lending price as white people. And, it prevented BIPOC communities from improving their homes—contributing to neighborhood decline. The effects of this policy are still evident today.

The racial wealth gap in the United States is the disparity in median wealth across the different races. White households have significantly more wealth than Black, Latino, and Native-American households. This report identifies consistent patterns of intent to prevent Black and Native people’s social mobility in national, state, and local public policies. For example, a 1964 study found evidence of racial discrimination in every US Department of Agriculture program in regard to funding, employment/promotion, and decision-making. Discriminatory practices continued even after the passage of the 1964 Civil Rights Act that legally ended racial discrimination in federal programs. In another example, the Servicemen’s Readjustment Act of 1944, commonly known as the GI Bill, made mortgages available to millions of WWII veterans with little-to-no down payment and very low-interest government-insured loans. However, with discriminatory lending guidelines and restrictive covenants excluded Black and Native veteran buyers. Between 1935 and 1968, less than two percent of federally insured home loans were for Black people. As a result of such policies, BIPOC people were systematically denied the same crucial opportunity to build wealth and stability through homeownership as white people. The persistent racial discrimination in lending (to this day), less access to family wealth and well-resourced peer networks for seed money, and the high price of real estate are barriers to entry for food entrepreneurs of color. Out of the ninety food businesses in downtown Durham, less than one fifth are owned by people of color, less than ten percent by Black proprietors, despite that Durham is a ‘minority-majority’ city.

The abolishment of slavery did not create employment opportunities, fair wages, or equitable working conditions for Black people. For example, although Durham was known as Black middle-class epicenter in the early 1900s—the vast majority of Durham’s Black residents were low wage working class. Industrialization and factory job opportunities slowly drew people from rural communities towards city living from the late 1800s on. The shift from farming to wage labor, a cash economy, and urban living was difficult for Black and poor white migrant communities alike. Historically, people working in agriculture, food processing, and food service have not benefited equally from social safety net programs. During the Great Depression, the U.S. passed legislation known as the New Deal. Such programs included: social security benefits and unemployment insurance (Social Security Act, 1935), new labor protection laws regarding the minimum wage (Fair Labor Standards Act, 1938), and the right to organize (National Labor Relations Act, 1935). Pressure from white southern legislators ensured that these new social programs excluded agricultural and domestic workers, which employed almost 75% of Black workers in the southern states in the 1930’s. Today, 94% of migrant farmworkers in North Carolina are native Spanish speakers. The H2A guest worker program of 1986 allowed agricultural employers to hire seasonal foreign workers, but such workers do not have the same labor protections as U.S. citizens.

From 1900-1950, the U.S. food system became increasingly industrialized. Shifting policy priorities in the Farm Bill since 1975 have also steadily increased corporate control and consolidation within the food system. In the early 2000s, more than 70% of food advertising was for convenience foods, candy and snacks, alcoholic beverages,  soft drinks, and desserts. Health research documents a strong association between increased advertising for non-nutritious foods and rates of childhood obesity and diabetes. Companies often target Black and Hispanic consumers with marketing for their least nutritious products, contributing to diet-related health disparities affecting communities of color. People of color and poor people in Durham experience a disproportionately high incidence of diabetes.

Impact of COVID-19 Pandemic of the Food System

The COVID-19 Pandemic has impacted the food system in countless ways and highlights weaknesses and inequities in the system. Lockdowns and government-ordered business closures disproportionately affect communities already in poverty. Across the country, grocery, food processing, and agricultural workers were deemed “essential” workers and are experiencing disproportionate exposure and death from the virus as a result. As of 2020, the federal government is now investing millions into SNAP, food banks, and unemployment benefits, and philanthropic organizations are investing deeply in the country’s extensive charitable food network.

The inequities that exist in Durham’s food system today are the direct result of social policy and practice that has, since the first contact between Indigenous people and European colonizers, placed the welfare of white citizenry over Black, Indigenous, and People of Color communities. In some cases, discrimination was the intent of the policy when it was created. In other cases, local implementation decisions impacted the potential equity of progressive policies. Understanding how these systems have been built over time is a critical first step in understanding how we might create new and equitable systems.

So why is the food history of a community so important? And can Durham's food history be applied to other places? Who owns land, who can grow food and make a living doing so, and who has access to food, any food, least of all healthy food? The answers are deeply influenced by historical policies and practices. These in retrospect, clearly exacerbated, supported, and even created food related calamities, the dual burden communities face of both food insecurity and diet related chronic diseases, such as diabetes and obesity. Understanding these practices is important in creating change. And in understanding that conditions imposed on neighborhoods rather than personal failings of residents explain what we see today.