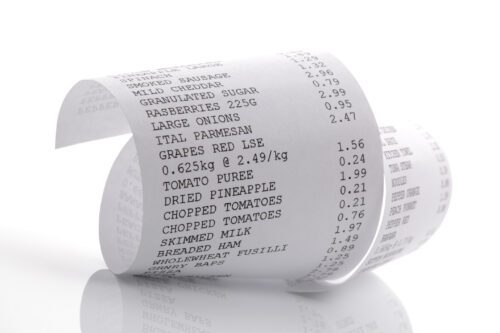 This research examined the issue of whether grocery taxes impact food insecurity. Jurisdictions impose grocery taxes in 16 states as a state tax, a county tax, or both. These jurisdictions represent over one-third of U.S. counties and can cost a family hundreds of dollars per year.

Although most states and counties in the U.S. exempt grocery foods from sales tax, the seven most food-insecure states in the U.S. have or are proposing a grocery tax at or above 4% (and offer no substantial tax exemption). Examining whether a link between food insecurity and grocery taxes exists is an important topic because these taxes affect populations that may be most vulnerable to becoming food insecure. To our knowledge, no previous study has examined the implications of these taxes for food insecurity. However, over a dozen state legislatures have been debating grocery taxes in recent years. Therefore, the significant benefit of studying the consequences of grocery taxes is to inform these states of the relevance of this food policy issue.

We find that a one percentage point increase in grocery tax rates relates to a 0.84% increase in the probability of a low-income household being food insecure. The result suggests that localities that tax groceries on average at 4.2% increase the probability of their low-income households food insecurity by 3.3%, with the caveat that our estimator may be biased towards or away from zero depending on whether increases in grocery taxes within counties over time are positively or negatively correlated with the unobservables. Given that 11.8% of Americans were food insecure in 2017, this result indicates that taxing food groceries contributes to food insecurity.

Grocery taxes increase food insecurity among the poorest residents, especially ones that do not participate in SNAP. We found a larger tax impact than the price impact reported in the literature (0.84% vs. 0.407%). The discrepancy is likely because our analysis focuses on all low-income populations, and the latter is of SNAP participants only. Policymakers can lessen the prevalence of food insecurity by lessening the burden of grocery taxes on lower-income households. Providing a rebate or credit or lowering or eliminating the grocery tax could remedy the grocery tax’s effects. Nguyen and Wilson (2017) suggest that policymakers eliminate the tax on healthy foods to lessen the tax burden, mitigate the revenue loss, and encourage healthy food consumption. Such moves are worthy of consideration, especially in times such as the COVID-19 pandemic, which has significantly increased U.S. food insecurity in a short time. However, these reforms would reduce tax revenue. Government officials would need to look at alternative revenuegenerating options. Alternative revenue sources include higher taxes on tobacco product/alcohol sales, income, or property (some of which may also affect food insecurity). Still, income and property taxes are less regressive taxes than grocery taxes, and sin taxes may yield other benefits. 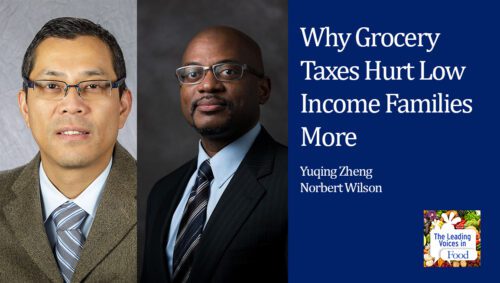 Taxes fund many important services, such as education, transportation, parks, and healthcare that benefit us all and our society. But does it make sense to tax groceries? Today, we're exploring research on the impact of grocery taxes, particularly, on low income families. We have two guests today who have collaborated on a really interesting project. Agricultural economist, Yuqing Zheng, of the University of Kentucky, and Norbert Wilson of Duke University. They're co-authors on a research paper entitled Putting Grocery Taxes on the Table, Evidence for Food Security Policy Makers.