This project produced a report on the impact of racial inequity in the food systems of Mexico and Brazil. Structural racism is a prevailing and often covert force that shapes differential access to resources and opportunities in many different societies. In food systems, structural racism may translate into inequities from production to consumption – thus encompassing disparities in land access, labor throughout the food production chain, and access to food in terms of quantity, quality (safety and nutrition), and cultural appropriateness (Holt-Giménez, 2010).

The lead researcher used the Web of Science database for the English search. This search was usually enough to find results in Spanish and Portuguese as well, since most articles provide abstracts in English. However, Google Scholar was occasionally used for complementary searches. To determine which search results were relevant to this project, the lead researcher analyzed abstracts based on three criteria:

The majority of the literature on the topic of racial inequities in food systems is produced in and focused on the United States. However, structural racism is a prevailing and often covert force that shapes differential access to resources and opportunities in many different societies around the world. When excluding US-focused resources from a literature search, we found that most results focused on other countries in the Americas (including Canada and Latin America), Australia, New Zealand, and, to a lesser extent, European countries.

In both countries, the strongest scholarship identified through this project focuses on food insecurity and nutritional status in isolated rural communities, where Indigenous and African identities have remained “untouched” by mestizaje narratives. Research is necessary to capture the large gaps outside of such contexts and identify race-specific mechanisms contributing to inequities in both countries’ food systems. This can only be achieved through context-appropriate methods that effectively engage with Mexicans’ and Brazilians’ perceptions of racial identities.

In Mexico, racial disparities are evident in rural settings, but discussions about the racial aspect of inequities in urban settings are greatly lacking.

In Brazil, race-specific discussions in the context of food systems are mostly focused on Indigenous and quilombola (traditional Black) communities in rural areas, and only tangentially discussed in other contexts. 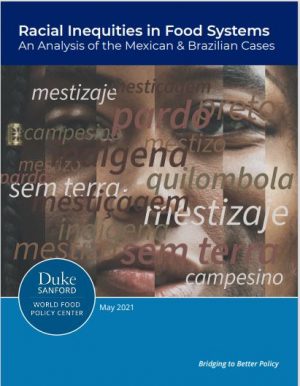